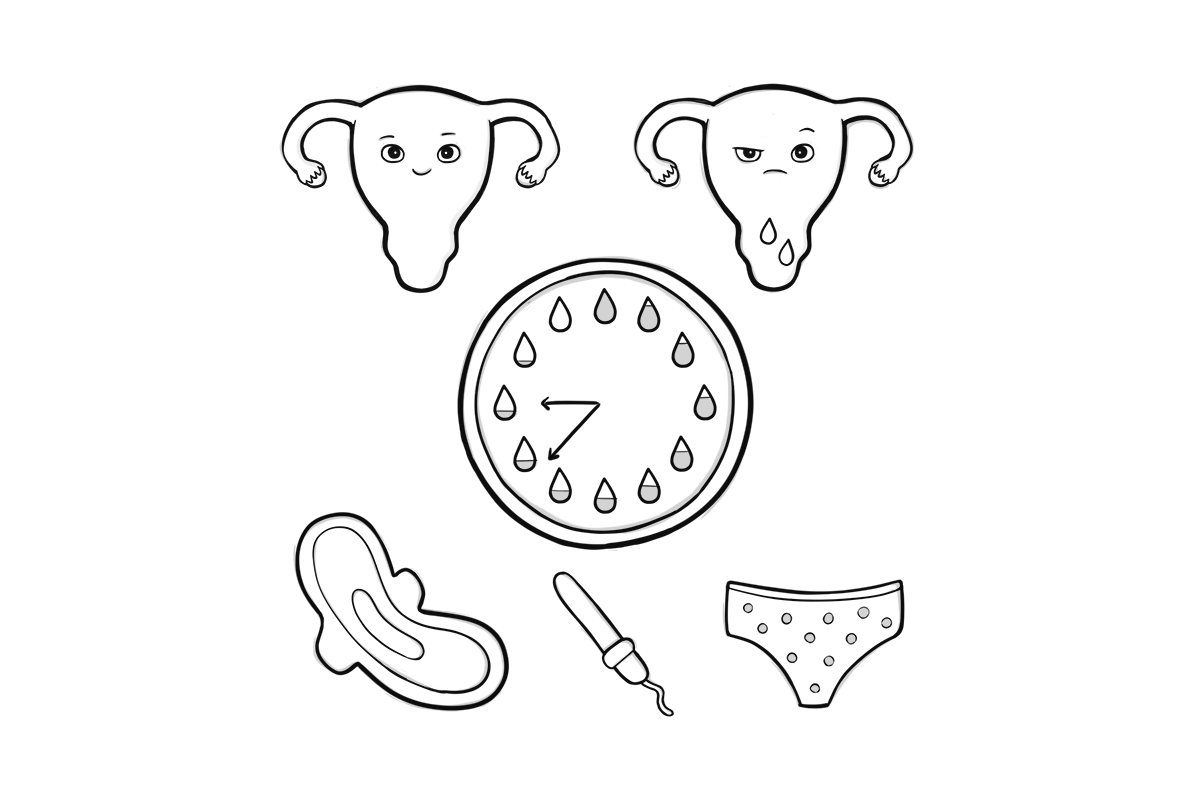 YOU KNOW WHAT I FIND WEIRD? The fact that most of us wouldn’t be able to explain how menstruation works – let alone namecheck all the hormones involved – despite the fact that it happens to us in a very visual, physical and emotional way every single month.

Until I read up on it, all I knew was that an egg finds its way into the fallopian tube somehow, and if it doesn’t mate up with some sperm coming from the other direction, the uterus lining breaks down and that’s known as a period. Did I manage to pass GCSE Biology with that level of understanding? Sheesh.

Obviously, there’s a lot more to menstruation than that – and having a basic understanding of the process will come in particularly helpful if you’re undergoing fertility treatment. Why? Because if you know what happens during a “normal” cycle, you’ll be far better able to grasp what they’re trying to achieve (and why) when you read other articles on this site about IVF.

The following explanation isn’t a comprehensive, blow-by-blow account of everything that happens: that would use up far too many pages of the internet. Instead, it’s a nutshellised version of the need-to-know stuff.

1: Inside your ovaries are hundreds of thousands of follicles – and most of those follicles (about 90% of them) contain something called an oocyte, which is an immature egg cell. (It’s pronounced “oh-iss-site” but I prefer “OOOOH!-site”.) The other follicles are empty, useless, poor excuses for follicles – but at least they’re in the minority.

How does the pituitary gland know what to do? Well, the hypothalamus in your brain produces a hormone called “gonadotrophin-releasing hormone” (GnRh). This hormone travels to the pituitary gland and tells it to release FSH. If you’re wondering how the hypothalamus knows what to do… just think of it as the all-knowing, all-powerful ruler of your brain.

3: While the follicles are developing, the cells around the eggs inside those follicles will produce another hormone, oestradiol (a type of oestrogen), which causes the lining of the uterus to thicken and prepare for an exciting new visitor: a fertilised egg.

One follicle takes the lead

4: Even though lots of follicles started to develop at the same time, there’s one standout, chest-thumping MVP of a follicle that grows faster than all the others – and it’s known as the “dominant follicle”. The cells inside that follicle will produce a buttload more oestradiol, which in turn sends a signal to decrease the amount of FSH being produced. The decrease in FSH has the effect of quieting all the other follicles, leaving only that one dominant follicle to continue growing.

5: Once that follicle reaches about 15–24mm in diameter, the oocyte inside it is pretty much ready to be fertilised. Only one ovary will produce the “dominant follicle” each time, and (pub quiz trivia time), the right ovary is more likely to be the winner.

6: But… not so fast. In order to fully mature and be fertilised, the oocyte needs to break free from its follicle and make its way somewhere that the sperm will find it.

7: So… remember that oestradiol back at the beginning? Its levels have been rising all this time, and right now we’re at “peak oestradiol” – which acts as a heads-up to the pituitary gland that the ovary is ready for oocyte release.

8: The pituitary gland responds by sending out a high level of a hormone called “luteinising hormone” (LH) – which in turn acts as a heads-up to the ovary: “IT’S TIME TO RELEASE THE OOCYTE!!!” This is known as the “LH surge”.

Swimmin’ freely down the fallopian tube

9: The oocyte completes its “maturing” process through a process called “meiosis”, then bursts out of the follicle, Incredible Hulk-style (I imagine) and leaves the ovary. Now called an “egg” (or “ovum” if you’re pretentious), it travels down the fallopian tube, ready to be fertilised by sperm swimming towards it. This, FYI, is the specific point at which you’re ovulating.

10: Ovulation normally occurs 24 to 36 hours after the LH surge, which is why high levels of LH indicate peak fertility. Once ovulation has taken place, the egg only lives for about 12–24 hours: after that it’s useless. That’s why sperm (which survive about three days) ideally need to be ready and waiting inside the fallopian tubes for fertilisation to take place.

11: If the egg is fertilised by sperm, it becomes known as a “zygote” – and it now contains all the 46 chromosomes needed to become a fully fledged human. The zygote will continue to travel down the fallopian tube before coming to rest in the uterus. At this stage, yet another hormone called “human chorionic gonadotropin” (hCG) is released, and it tells the ovaries to pump out progesterone. The progesterone kind of takes over the role of oestradiol in keeping the uterus lining thick and nourished. Oestradiol/oestrogen and progesterone levels then remain high throughout pregnancy.

Fun fact: pregnancy tests measure hCG levels, because men and non-pregnant women have zero levels of that particular hormone in their bodies.

(If the egg isn’t fertilised, it’ll be lost from the uterus. Meanwhile, oestradiol and progesterone levels will drop, the uterus lining will break down, and you’ll get your period about two weeks later.)

To simplify things (and avoid wearing out the “o” on my keyboard), most of the articles on this site just use the word “egg” instead of “oocyte”, “ovum” “egg” and “zygote”.