FSH levels and IVF: what you need to know 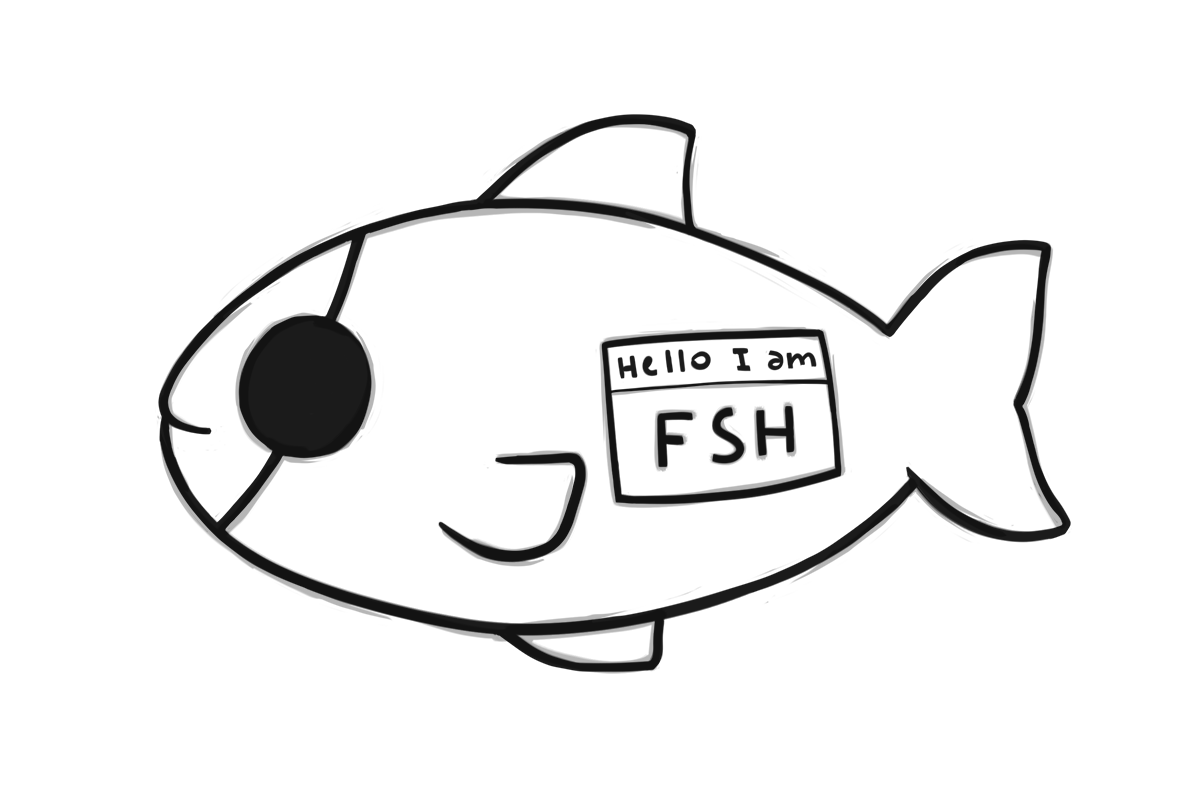 BEFORE I STARTED RESEARCHING IT, THE ONLY THINGS I KNEW ABOUT FSH WERE: a) I had an embarrassingly small amount of the stuff, and b) it looks a bit like the word “FISH”.

Turns out there’s a lot more to FSH than how it relates to my personal situation and how many letters it has in common with another word. Something else I discovered in the course of my fact-finding mission? FSH is a bitch of a hormone to learn about: the information out there is confusing as hell. Also, I’m still not quite sure why it’s taken so seriously when there are other, better hormones out there to measure.

But if you’re undergoing fertility treatment (or thinking about it), you’ll get tested for it – so it’s worthwhile knowing exactly what the test results imply.

What does FSH stand for, and what does it do?

FSH stands for “follicle-stimulating hormone”, and it’s released by the pituitary gland to stimulate the growth of the egg-containing follicles in your ovaries.

When FSH gets to work, lots of follicles will grow at the same time – and the cells around the eggs inside those follicles will produce another hormone called oestradiol (a type of oestrogen). This causes the lining of the uterus to thicken and prepare to receive the much-hoped-for fertilised egg in a couple of weeks’ time.

So, the follicles are all growing happily… but there’s one super-impressive follicle that grows faster than all the others. It’s known as the “dominant follicle”, and it’ll produce a load more oestradiol – which in turn sends a signal to decrease the amount of FSH being produced. The decrease in FSH has the effect of quieting all the other follicles, leaving only that one dominant follicle to continue growing.

Eventually, the egg inside the dominant follicle will be ready to break free from that follicle in order to be fertilised. To get the process moving, the pituitary gland releases a high amount of another hormone called “luteneising hormone” (LH), which acts as a heads-up to the ovary that “IT’S TIME TO RELEASE THE EGG!!!”

The egg breaks free from the follicle and travels down to the fallopian tube, waiting to be fertilised.

FSH levels vary during your menstrual cycle: they’ll peak just before ovulation (when the follicles are growing) and will be lowest when you get your period.

That, in a nutshell, is what FSH is and what it does. Next question: what do we learn from measuring FSH levels?

Why do FSH levels get measured?

Your FSH level will be measured with a blood test on day 3 of your period. You’ll also probably have blood tests for your AMH level and oestradial level – as well as a scan to measure your antral follicle count. Together they’re known as “baseline” or “day 3” tests, and they all help to give an indication of how many egg-containing follicles you have remaining in your ovaries.

How do FSH levels relate to the number of egg-containing follicles I have?

If your ovaries have many follicles, your body won’t need to produce much FSH in order to induce normal ovulation: you can splutter out a token amount of the stuff and BAM: you grow a bunch of follicles.

The reason to test your FSH level at the start of a cycle (day 3ish of your period) is because, at this stage, the results will provide information on how hard your body is working to get the whole ovulation rigmarole started.

What amount of FSH is considered “good”?

Different clinics and hospitals have different figures, but here are some typical ranges:

It’s usually to do with age: the number of follicles depletes with age, which is why FSH levels increase with age too. Women who are going through the menopause will typically have an extremely high FSH level (and a low AMH level). (Find out more about age and egg quantity here.)

If you’re young, it could mean you’re going through premature menopause. Other possible conditions include premature ovarian failure as well as (rarely) congenital adrenal hyperplasia or a pituitary tumour. Fertility doctors will help you figure out the cause.

Is it possible to have an FSH level that's too low?

Yup! It’s much rarer, but definitely not impossible. A low FSH level usually means that one or more of the following is going on:

If you have a low FSH level for any the reasons above, it’s unlikely you’ll be able to get pregnant naturally. To conceive, you can either “fix” the problem (if possible) or go down the fertility treatment route.

(Women who are already pregnant or on birth control pills also have a very low FSH level, but I’m assuming they’re not spending their time doing FSH tests. Or, indeed, reading this website.)

By the way, my FSH level was 0.1 IU/L (zero point one!!!) because I have a dodgy hypothalamus. IVF treatment bypasses both the hypothalamus and pituitary gland (which normally send messages to the ovaries to release various hormones) – working directly with the ovaries instead. IVF worked for me – and it’s also worked for many others in similar situations.

How do FSH levels differ from “ovarian reserve”?

“Ovarian reserve” measures both quantity and quality, whereas FSH is simply an indicator of quantity (i.e. egg count).

What’s more, FSH isn’t even a very good indicator of quantity: while a high baseline FSH result tends to accurately predict low egg quantity, a normal result doesn’t necessarily mean that there’s a plentiful supply of them. Many women have a reduced egg supply despite a normal FSH level, and that’s why it’s important to also measure antral follicles and AMH levels in the baseline test: you want to get as many measurements as possible in order to get a better overview of what’s really going on inside that body of yours.

How is it possible to have both a “normal” FSH level and a shitty egg supply?

For a start, FSH levels fluctuate THE WHOLE DAMN TIME between cycles. Say you only test once, and it indicates that your FSH level is normal. If you were to test again, you might see an “abnormal” – i.e. high – level. But if you don’t get tested again, you’ll never know.

Once a high level has been established, it means you have a high FSH level – no matter what other future results show. Normal values in other menstrual cycles don’t mean the “abnormal” result was incorrect. Basically, your very worst, most depressing result from an FSH test will be your most accurate – but if you only have one FSH test, you might not ever realise it.

My FSH level is high and my doctor is pretty certain it means I have a small number of eggs. Should I get fertility treatment?

If your FSH level is high, you probably are lacking in the egg department – and it’ll be confirmed with tests that show high a oestradiol level, low AMH and a low antral follicle count.

But not everyone with a high FSH level needs fertility treatment – at least, not if they’re under the age of 35. Why? Because with a natural cycle, you only release one egg a month anyway: it’s not as if you somehow have to magic up 30 eggs per cycle to keep the IVF doctors happy. What’s more, the quality of your eggs is likely to be good (egg quality also decreases with age).

Having said that, you’re here, reading this paragraph – and you already know your FSH level. That suggests you’ve already tried and struggled to conceive naturally, and you’ve decided that fertility treatment is the way forward. The next section goes into more detail about why you have a good chance of success.

If you’re over the age of 35, FSH levels matter a lot more – whether you’re undergoing fertility treatment or not. That’s because the quality of your eggs is also likely to be compromised, which means it’s less likely that natural conception or fertility treatment will work as well for you. As a result, it probably will be much harder to get pregnant. Here’s more information about how egg quality and egg quantity matter when it comes to conception.

My FSH level is high AND I definitely can’t conceive naturally! Am I a lost cause for IVF?

If you’re young, you have a high FSH level and you can’t get pregnant, it’s definitely worth trying IVF because you probably still have fabulous-quality eggs – and successful fertilisation and implantation also relies on good-quality eggs.

It’s for this reason that the vast majority of clinics and hospitals will still treat you if you have a high FSH level (unless, of course, it’s clear that you’ve gone through early menopause). They may well put you on a more aggressive IVF protocol (to make sure you produce as many follicles as you possibly can), but that’s about the only difference. (There'll be a dedicated article about IVF protocols soon, but for now, you'll find a bit of information about protocols in the article about the IVF process from start to finish.)

(If it turns out you have low-quality eggs too, despite being relatively young, there are a few things you can potentially do to improve them. Read more about how egg quality can be measured – and how you can improve it if necessary.)

If you’re over the age of 35, things get trickier: it’s likely that you no longer have high-quality eggs, and IVF is therefore less likely to be successful. BUT plenty of people in your situation have undergone successful IVF treatment, and it could happen to you too. Bear in mind that many clinics and hospitals have age cutoffs for treatment, though. If you’re no longer eligible for IVF treatment using your own eggs, you could consider donor eggs or embryos.

It’s also important to remember that while you can’t increase your egg count, you can improve the quality of your eggs. This article explores some of the ways in which you can do it.

There’s something FiSHy about FSH…

My layperson opinion is that measuring the FSH level causes more aggro than it’s worth: far better to look at stuff like AMH and oestradiol. But maybe that’s why I’m just writing an article about it rather than busy creating beautiful babies for delighted new parents.

Oestradiol levels and IVF: what you need to know